Dogs owners have become much more aware of heartworm, the potentially deadly parasite carried by mosquitos. In 2019, more than 13 million dogs in the US were tested for heartworm with 166,817 cases testing positive.

Already this year, as of April 8, 2020, 45,760 cases of heartworm disease have been diagnosed in the US. More than 3.5 million dogs have been tested, resulting in an infection rate of 1.3%, but rates vary depending where you live. In the southeastern states, infection rates are higher. In Texas, out of 318,698 dogs tested for heartworm, 9,784 tested positive for a 3.07% infection rate.

Although numbers of canine Chagas cases are not yet tracked, early evidence indicates the incidence of Chagas disease in dogs might be far higher than heartworm infection. A repeated, cross-sectional study was conducted in shelters across Texas over 18 months and concluded 18.1% of shelter dogs were infected by T. cruzi. Other studies from Texas, Louisiana, and Oklahoma demonstrated infection rates ranging from 3.6% to 22%. Targeted studies on working dogs in Texas kenneled outdoors found rates as high as 57.6%.

The 10 states with dog populations at highest risk for heartworm and Chagas disease are roughly the same. Using statistics from the US Census and the Companion Animal Parasite Council (CAPC) and calculations from the American Veterinary Medical Association (AVMA), we compare infection rates for both diseases in the highest-risk states, shown in Table 1: 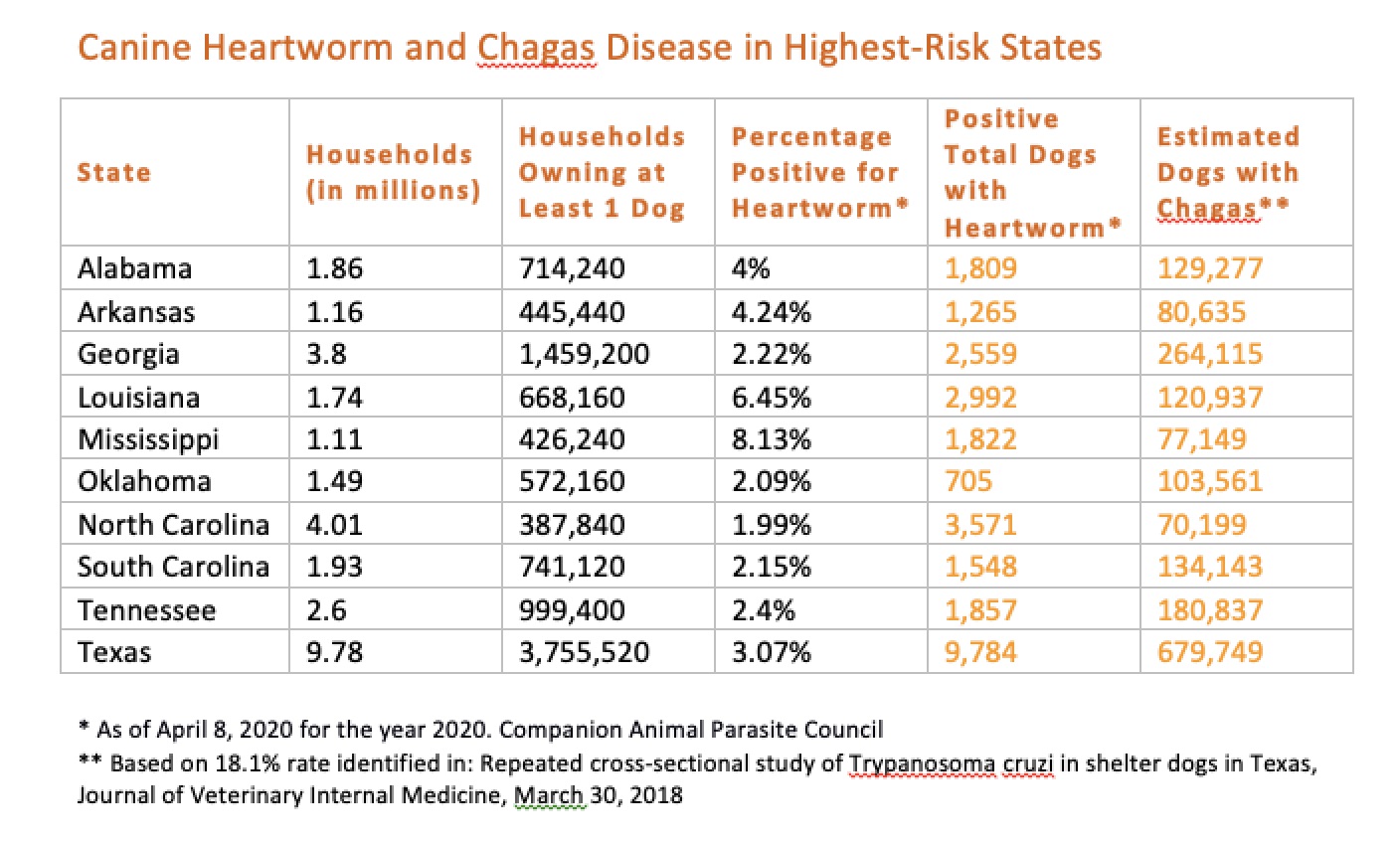 That’s a lot of pups. Certainly, not all dogs in all states are tested for heartworm, and few dogs to date across the country have been tested for Chagas disease, simply due to lack of awareness. But even if you reduced number of dogs estimated to have Chagas disease by 90%—the numbers still far exceed heartworm cases.

With International Chagas Day on April 14, it’s clear that much needs to be done to increase awareness of the disease in dogs and to begin tracking Chagas testing and positive cases. If you live in a high-risk state for heartworm, it would be a good idea to have your dog tested for Chagas disease too.