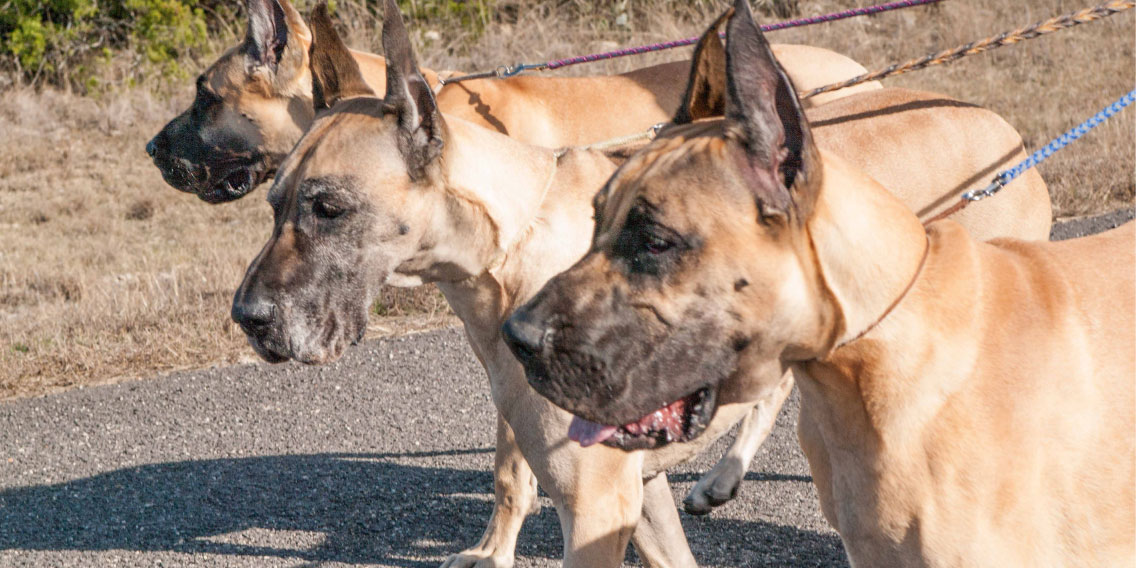 Aspen (above left) and Storm (above right) faced close calls with Chagas disease. Their dam, Summer (above middle) whelped seven strong, healthy puppies on Easter Sunday 2017: Storm, Rain, Cassie, Rhythm, Cairo, Zoe, and Aspen. The breeding had been meticulously researched and planned, everything went well, and there was no indication that anything was wrong.

Twelve weeks later, Cassie threw up and was unusually quiet. Thinking she had an impaction, Lori took her to the vet. X-rays were negative but her heart rate had skyrocketed to over 300 beats per minute. After medication and observation, they transferred Cassie to an emergency clinic. She made it through the night but took a turn for the worst the next day and passed away. When Lori got home that night, another puppy, Rhythm, was limping with no visible sign of a wound. Lori kept an eye on her. The next day she received a phone call from a family that had adopted Rain—he had passed away suddenly the night before. On Monday, Lori took Summer and the four remaining puppies for Chagas testing. Rhythm’s heart rate was escalated, and in the meantime, necropsy results showed that the first puppy had died from Chagas. Multiple local veterinarians began looking online to find a treatment to no avail. Meanwhile, Rhythm became worse and Zoe’s heart rate suddenly went up. The situation looked hopeless. Within several days, test results for all of the dogs came back positive for Chagas and Zoe passed away. One local vet suggested that Lori contact Dr. Madigan. He immediately started Summer, Storm, Aspen, and Rhythm on medication, but for Rhythm, the disease had done too much damage.

Today, Summer, Storm, and Aspen are completing treatment. All three dogs are energetic and happy to play outdoors—or comandeer the living room sofa for a nap. Storm likes to play keep-away with his favorite rock, Aspen stalks and ambushes him, and Summer joins in for a rumble. Thanks to Vida Pharmacal, these dogs have long, happy lives ahead of them, and they have alerted many other breeders to the presence of Chagas disease so that other dogs might also be saved. Many thanks to Lori, her husband Tom, and the dogs’ co-breeder.